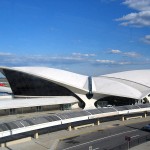 Googie architecture is a form of modern architecture, a subdivision of futurist architecture influenced by car culture, jets, the Space Age, and the Atomic Age. Originating in Southern California during the late 1940s and continuing approximately into the mid-1960s, Googie-themed architecture was popular among motels, coffee houses and gas stations. The school later became widely known as part of the Mid-Century modern style, elements of which represent the populuxe aesthetic, as in Eero Saarinen’s TWA Flight Center. The term “Googie” comes from a now defunct coffee shop and cafe built in West Hollywood designed by John Lautner. Similar architectural styles are also referred to as Doo Wop. 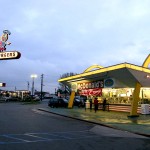 McDonald’s Restaurant #3
U.S. National Register of Historic Places
The McDonald’s in Downey, California is almost unchanged in appearance since it opened in 1953.

Features of Googie include upswept roofs, curvaceous, geometric shapes, and bold use of glass, steel and neon. Googie was also characterized by Space Age designs symbolic of motion, such as boomerangs, flying saucers, atoms and parabolas, and free-form designs such as “soft” parallelograms and an artist’s palette motif. These stylistic conventions represented American society’s fascination with Space Age themes and marketing emphasis on futuristic designs. As with the Art Deco style of the 1930s, Googie became less valued as time passed, and many buildings in this style have been destroyed. Some examples have been preserved, though, such as the oldest McDonald’s stand (located in Downey, California) that was put on the National Register of Historic Places in 1983.